Sometimes, Unitarian Universalists ask: “Why do we celebrate Christmas? Haven’t we become post-Christian? Won’t we offend some of our congregants if we sing carols and perform the Messiah or have a Christmas pageant?” We’ve even gone so far as to create a new winter holiday called “Chalica” celebrating our seven principles by lighting candles each night for seven nights in an attempt to be more authentic to our current day practice and theology.

We have become so literal and so earnest about “right belief”, y’all, so averse to religious symbol. It hobbles us in the meaning making department.

Christmas is the most authentic of all Unitarian Universalist holidays. That’s what I want to say. You’ll hear folks talk about Christmas as authentically “ours” because our ancestors were responsible for bringing the Christmas tree to America, or Americanized the Santa Claus we now understand as THE Santa Claus, or that Charles Dickens was Unitarian, or even that a Unitarian wrote Jingle Bells. All true. But I’m just gonna go ahead and say that Christmas is a Unitarian Universalist holiday BECAUSE JESUS.

Christmas is a holiday that celebrates the incarnation, humanity as God with skin on. Unitarians throughout history reminded us again and again of two things: 1) that God is God, and 2) that the fact that Jesus was not fully God is important: Jesus was born to tell us that we are the ones we’ve been waiting for; proof that we humans can do God stuff. The Messiah is among us, born in human form again and again. revealed in the most unlikely of places, like a manger or a jail cell. That God’s kingdom is inside of us, among us, beneath our feet. That we are responsible for making it so.

And Universalists remind us that God is love. That God so loved the world that God gave Jesus to us, to remind us that we are each God’s own beloved. Sisters and brothers of spirit, one. He appeared and the soul felt its worth. This revelation demands that we sing about it, reveling. And then that we DO SOMETHING about it: helping, saving, repairing, caring.

And this is a Unitarian Universalist holiday because whether or not we believe in a supernatural God, a Godly Jesus, or that God’s banner over us is love, we Unitarian Universalists are humanists, and Jesus was the ultimate humanist. Jesus believed in the human capacity to love the hell out of this world. And if we truly believe that we are alone down here, then we better get at it, ’cause no big man in the sky’s gonna do it for us.

We know that we are the ones we’ve been waiting for, that we are worthy, and that we need to show one another extravagant, wasteful love to make this broken world whole again. Let’s stop arguing over who owns this holiday, who is worthy of celebrating it, who believes it the most piously and reverently. Let’s stop being so gosh darn literal. Let’s stop worrying who we might offend among us by singing about angels and kings, and start living the incarnation instead. We know that we have this lifetime to repair the world, and that we don’t have much time to do it.

Go get ’em. Be princes and princesses of peace.

Why Do We Come to First Parish Sherborn?

We asked that question to many people in our congregation, and here are a few of the answers we got back. 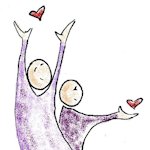